CBD and the Fight Against Insomnia 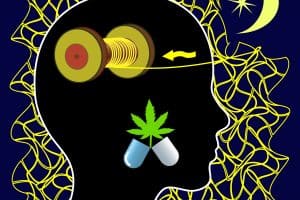 08 Aug CBD and the Fight Against Insomnia

Posted at 17:37h in Health and Wellness by Mike Wong 0 Comments
0 Likes
Share

Contrary to what many might think, sleep is actually a very complex neurological phenomenon.  Although your conscious mind is “turned off”, there are still many thousands of processes that are occurring in your brain, from modulation of your heartbeat and respiratory rate, to the consolidation of memories and skills learned.  In addition, there are different phases of healthy sleep, each of which produces distinct and unique brainwave patterns.

The two basic categories are REM and NREM sleep: REM stands for Rapid Eye Movement.  REM is the phase of sleep in which dreams occur, and is characterized by, you guessed it, rapid movement of the eyes.  NREM simply means non-REM and therefore encompasses every other phase of sleep.  During REM sleep, a typical brain scan will reveal brain waves and patterns that look extremely similar to those of an individual who is awake; this is because your subconscious mind is very busy processing all of the information that it absorbed during the day and recreating certain themes or emotions as dreams.

What does CBD have to do with it?

CBD functions in many different areas of the brain.  One of the primary benefits of CBD comes from its antagonization of CB1 receptors in the prefrontal cortex.  This is the part of the brain responsible for higher thought and cognition.  In this area of the brain, there are two basic types of neurons, excitatory and inhibitory.

Excitatory neurons, “green lights” for your brain, receive signals from only one or two neurons, but they pass that signal onto hundreds or even thousands, and those then do the same thing.  This greatly amplifies the signal and is responsible for much brain activity when you consider that there are literally billions of neurons in your brain.

Inhibitory neurons, “red lights” for you brain, work in the exact opposite way.  They may take signals from many hundreds of neurons, but they only pass it on to a few; this stops the signal and limits brain activity.  This is why the brain is pretty good at modulating excitation and inhibition and keeping you “level headed” for the most part.  (When you get really angry or scared, this whole process flips upside down.)

CBD works by stopping the activity of “green light” neurons and boosting the activity of “red light” neurons. CBD triggers the release of “red light” chemicals in “green light” cells, and the release of “green light” chemicals in “red light” cells.  Interestingly, it does the same exact thing to both types of cell, but they simply respond in different ways to the presence of CBD.  Your brain’s circadian rhythms regulate this process on a 24 hour basis, and CBD can be thought of as a lubricant for the complex circadian rhythm, allowing it to work its best.

How does this pertain to sleep?

As we discussed earlier, sleep is a very complicated function of the brain.  We are evolutionarily equipped to have circadian rhythms which regulate our sleep and wakefulness, and are tied to daylight and our eating patterns among other things.  When there is over-excitation in the brain, particularly in the prefrontal cortex, the wakeful period of the circadian rhythm becomes prolonged, therefore cutting into the sleep period.  Regular stress throughout the day can cause this in addition to stimulants like caffeine or ADHD medication.  CBD’s balancing effect on the excitatory and inhibitory neurons in this part of the brain helps to stabilize and fortify your body’s natural circadian rhythms helping you sleep longer and better at night.  When coupled with other cannabinoids, it can also cause drowsiness by inhibiting the reuptake of melatonin in the same part of the brain, and by stimulating the mood-boosting neurotransmitter serotonin.