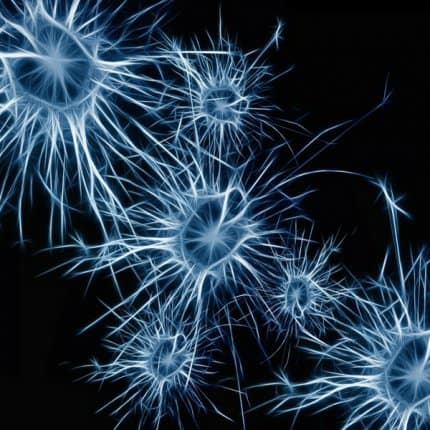 The endocannabinoid system and digestive imbalance play major roles in Parkinson’s disease. Research on CBD, THC, and THCV has demonstrated that cannabis medicine may help to manage PD symptoms.

Highlights:
Scientists at the University of Louisville School of Medicine in Kentucky have identified a previously unknown molecular target of cannabidiol (CBD), which may have significant therapeutic implications for Parkinson’s Disease (PD).

A poster by Zhao-Hui Song and Alyssa S. Laun at the 2017 meeting of the International Cannabinoid Research Society in Montreal disclosed that CBD activates a G-coupled protein receptor called “GPR6” that is highly expressed in the basal ganglia region of the brain. GPR6 is considered an “orphan receptor” because researchers have yet to find the primary endogenous compound that binds to this receptor.(1)

It has been shown that a depletion of GPR6causes an increase of dopamine, a critical neurotransmitter, in the brain. This finding suggests GPR6could have a role in the treatment of Parkinson’s, a chronic, neurodegenerative disease that entails the progressive loss of dopaminergic (dopamine-producing) neurons and consequent impairment of motor control. By acting as an “inverse agonist” at the GPR6 receptor, CBD boosts dopamine levels in preclinical studies.

Parkinson’s affects an estimated 10 million people worldwide, including one million Americans. It is the second most common neurological disorder (after Alzheimer’s Disease). Over 96 percent of those diagnosed with PD are over 50 years old with men being one-and-a-half times more likely to have PDthan women. Uncontrolled PD significantly reduces the patient’s quality of life and can render a person unable to care for themselves, trapped in a body they cannot control.

Parkinson’s Disease is most associated with compromised motor function after the loss of 60-80% of dopamine-producing neurons. As dopaminergic neurons become damaged or die and the brain is less able to produce adequate amounts of dopamine, patients may experience any one or combination of these classic PD motor symptoms: tremor of the hands, arms, legs or jaw; muscle rigidity or stiffness of the limbs and trunk; slowness of movement (bradykinesia); and /or impaired balance and coordination (postural instability).

Additional symptoms include decreased facial expressions, dementia or confusion, fatigue, sleep disturbances, depression, constipation, cognitive changes, fear, anxiety, and urinary problems. Pesticide exposure and traumatic brain injury are linked to increased risk for PD. Paraquat, an herbicide sprayed by the DEA in anti-marijuana defoliant operations in the United States and other countries, resembles a toxicant MPTP [methyl-phenyl-tetrahydropyridien], which is used to simulate animal models of Parkinson’s for research purposes.(2)

Within the PD brain there are an inordinate number of Lewy bodies – intracellular aggregates of difficult to break down protein clusters – that cause dysfunction and demise of neurons.(3) This pathological process results in difficulties with thinking, movement, mood and behavior. The excessive presence of Lewy bodies, coupled with the deterioration of dopaminergic neurons, are considered to be hallmarks of Parkinson’s. But mounting evidence suggests that these aberrations are actually advanced-stage manifestations of a slowly evolving pathology.

It appears that non-motor symptoms occur for years before the disease progresses to the brain, and that PD is actually a multi-system disorder, not just a neurological ailment, which develops over a long period of time. According to the National Parkinson’s Foundation, motor symptoms of PD only begin to manifest when most of the brain’s dopamine-producing cells are already damaged.

Patients whose PD is diagnosed at an early stage have a better chance of slowing disease progression. The most common approach to treating PD is with oral intake of L-dopa, the chemical precursor to dopamine. But in some patients, long-term use of L-dopa will exacerbate PD symptoms. Unfortunately, there is no cure – yet. 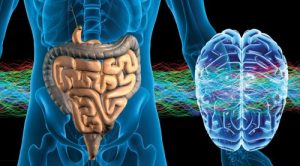 What causes Parkinson’s? One theory that is gaining favor among medical scientists traces the earliest signs of PD to the enteric nervous system (the gut), the medulla (the brainstem), and the olfactory bulb in the brain, which controls one’s sense of smell. New research shows that the quality of bacteria in the gut – the microbiome – is strongly implicated in the advancement of Parkinson’s, the severity of symptoms, and related mitochondrial dysfunction.

Defined as “the collection of all the microorganisms living in association with the human body,” the microbiome consists of “a variety of microorganisms including eukaryotes, archaea, bacteria and viruses.” Bacteria, both good and bad, influence mood, gut motility, and brain health. There is a strong connection between the microbiome and the endocannabinoid system: Gut microbiota modulate intestinal endocannabinoid tone, and endocannabinoid signaling mediates communication between the central and the enteric nervous systems, which comprise the gut-brain axis.

Viewed as “the second brain,” the enteric nervous system consists of a mesh-like web of neurons that covers the lining of the digestive tract – from mouth to anus and everything in between. The enteric nervous system generates neurotransmitters and nutrients, sends signals to the brain, and regulates gastrointestinal activity. It also plays a major role in inflammation.

The mix of microorganisms that inhabit the gut and the integrity of the gut lining are fundamental to overall health and the ability of the gut-brain axis to function properly. If the lining of the gut is weak or unhealthy, it becomes more permeable and allows things to get into the blood supply that should not be there, negatively impacting the immune system. This is referred to as “leaky gut.” Factor in an overgrowth of harmful bacteria and a paucity of beneficial bacteria and you have a recipe for a health disaster.

The importance of a beneficial bacteria in the gut and a well-balanced microbiome cannot be overstated. Bacterial overgrowth in the small intestine, for example, has been associated with worsening PD motor function. In a 2017 article in the European Journal of Pharmacology, titled “The gut-brain axis in Parkinson’s disease: Possibilities for food-based therapies,” Peres-Pardo et al examine the interplay between gut dysbiosis and Parkinson’s. The authors note that “PD pathogenesis may be caused or exacerbated by dysbiotic microbiota-induced inflammatory responses … in the intestine and the brain.”(4)

The microbiome also plays an important role in the health of our mitochondria, which are present in every cell in the brain and body (except red blood cells). Mitochondria function not only as the cell’s power plant; they also are involved in regulating cell repair and cell death. Dysfunction of the mitochondria, resulting in high levels of oxidative stress, is intrinsic to PD neurodegeneration. Microbes produce inflammatory chemicals in the gut that seep into the bloodstream and damage mitochondria, contributing to disease pathogenesis not only in PD but many neurological and metabolic disorders, including obesity, type-2 diabetes, and Alzheimer’s.

The evidence that gut dysbiosis can foster the development of PD raises the possibility that those with the disease could benefit by manipulating their intestinal bacteria and improving their microbiome. Enhancing one’s diet with fermented foods and probiotic supplements may improve gut health and relieve constipation, while also reducing anxiety, depression and memory problems that afflict PD patients.

Cannabis therapeutics may also help to manage PD symptoms and slow the progression of the disease. Acclaimed neurologist Sir William Gowers was the first to mention cannabis as a treatment for tremors in 1888. In his Manual of Diseases of the Nervous System, Grower noted that oral consumption of an “Indian hemp” extract quieted tremors temporarily, and after a year of chronic use the patient’s tremors nearly ceased.

Modern scientific research supports the notion that cannabis could be beneficial in reducing inflammation and assuaging symptoms of PD, as well as mitigating disease progression to a degree. Federally-funded preclinical probes have documented the robust antioxidant and neuroprotective properties of CBD and THC with “particular application … in the treatment of neurodegenerative diseases, such as Alzheimer’s disease, Parkinson’s disease and HIV dementia.” Published in 1998, these findings formed the basis of a U.S. government patent on cannabinoids as antioxidants and neuroprotectants.

Although clinical studies focusing specifically on the use of plant cannabinoids to treat PD are limited (because of marijuana prohibition) and convey conflicting results, in aggregate they provide insight into how cannabis may aid those with Parkinson’s. Cannabidiol, THC, and especially THCV all showed sufficient therapeutic promise for PD in preclinical studies to warrant further investigation. Additional research might shed light on which plant cannabinoids, or combination thereof, is most appropriate for different stages of Parkinson’s. 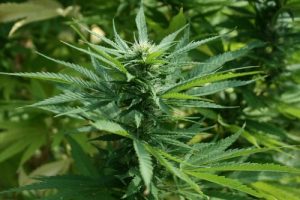 Anecdotal accounts from PD patients using artisanal cannabis preparations indicate that cannabinoid acids (present in unheated whole plant cannabis products) may reduce PD tremor and other motor symptoms. Raw cannabinoid acids (such as CBDA and THCA) are the chemical precursors to neutral, “activated” cannabinoids (CBD, THC). Cannabinoid acids become neutral cannabinoid compounds through a process called decarboxylation, where they lose their carboxyl group through aging or heat. Minimal research has focused on cannabinoid acids, but the evidence thus far suggests that THCA and CBDA have powerful therapeutic attributes, including anti-inflammatory, anti-nausea, anti-cancer, and anti-seizure properties. In a 2004 survey of cannabis use among patients at the Prague Movement Disorder Centre in the Czech Republic, 45 percent of respondents reported improvement in PD motor symptoms.

Cannabis clinicians are finding that dosage regimens for medical marijuana patients with PDdon’t conform to a one-size-fits-all approach. In her book Cannabis Revealed (2016), Dr. Bonni Goldstein discussed how varied a PD patient’s response to cannabis and cannabis therapeutics can be:

“A number of my patients with PD have reported the benefits of using different methods of delivery and different cannabinoid profiles. Some patients have found relief of tremors with inhaled THC and other have not. A few patients have found relief with high doses of CBD-rich cannabis taken sublingually. Some patients are using a combination of CBD and THC … Trial and error is needed to find what cannabinoid profile and method will work best. Starting a low-dose and titrating up is recommended, particularly with THC-rich cannabis. Unfortunately, THCV-rich varieties are not readily available.”

Juan Sanchez-Ramos M.D., PhD, a leader in the field of movement disorders and the Medical Director for the Parkinson Research Foundation, told Project CBD that he encourages his patients to begin with a 1:1 THC:CBD ratio product if they can get it. In a book chapter on “Cannabinoids for the Treatment of Movement Disorders,” he and coauthor Briony Catlow, PhD, describe the dosage protocol used for various research studies that provided statistically positive results and a dosing baseline for PD. This data was included in a summary of dosing regimens from various studies compiled by Dr. Ethan Russo:

Of course, each patient is different, and cannabis therapeutics is personalized medicine. Generally speaking, an optimal therapeutic combination will include a synergistic mix of varying amounts of CBDand THC – although PD patients with sleep disturbances may benefit from a higher THC ratio at night.

Dr. Russo offers cogent advice for patients with PD and other chronic conditions who are considering cannabis therapy. “In general,” he suggests, “2.5 mg of THC is a threshold dose for most patients without prior tolerance to its effects, while 5 mg is a dose that may be clinically effective at a single administration and is generally acceptable, and 10 mg is a prominent dose, that may be too high for naïve and even some experienced subjects. These figures may be revised upward slightly if the preparation contains significant CBD content … It is always advisable to start at a very low dose and titrate upwards slowly.”

It is important to treat the patient as a whole – mind, body and soul. The following are a few lifestyle modifications that may provide relief from PD symptoms and improve quality of life.