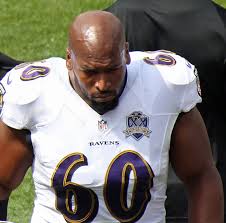 He got paired with ex-San Diego running back Hank Bauer, who had come to the PGA West Stadium golf course with an added agenda.

The men shared a golf cart and stories about their era of feral football before coming around to how their bodies were breaking down like old, plastic skeletons. Bauer, known as “Hank the Howitzer” while playing for the Chargers, had been holding similar conversations with former players for the past year. He had come to the desert with something to help.

Bauer handed Plunkett a bottle. “Try it, what have you got to lose?” he asked the quarterback who won two Super Bowls with the Raiders during a 15-year NFL career.

After years of managing pain through the use of alcohol, nonprescription anti-inflammatory drugs and highly addictive opioids, some former football players are turning to cannabis for relief.  Mostly through word-of-mouth exchanges, interest in the drug has increased as 29 states and Washington, D.C., have legalized marijuana for medicinal and, in some cases, recreational use.

But while America speeds along a road to marijuana acceptance, the old-guard NFL’s stance against players’ use remains at a standstill on an issue that has confounded the country for decades.

The door may have creaked open slightly this summer as the image-conscious NFL absorbs mounting pressure from ex-players fed up with a league they say turned them into pill poppers and brain-damaged seniors.

Commissioner Roger Goodell acknowledged for the first time that officials want to work with the NFL Players Association to determine whether medical marijuana can provide a safe alternative to soothe the physical ailments that come with football’s G-force collisions.

Goodell’s concession came after the union last year created a pain management committee to develop a best practices policy it hoped would lead to a diminished role for opioids, which have been part of football’s medical playbook for decades.

“What we have proposed to the union is before we change the policy, relax it, strengthen it, turn it upside down, we need to do more research on the pain management qualities” of cannabis, said Joe Lockhart, the NFL’s chief communications strategist.

In an interview with the Bay Area News Group, Lockhart said scientists don’t have a clear understanding of the potential side effects of cannabis nor do they have definitive answers about how marijuana can treat acute versus chronic pain.

“These are not black or white: Do you either take an opioid or do you use marijuana?” Lockhart said. “There are many different kinds of pain management, and that’s where we want to dig in. That’s what is beneficial to our players. There is a consensus among our advisors that we need to know more before we make a policy decision.”

Lockhart added the league won’t necessarily wait for federal drug laws to change to endorse updating the substance-abuse policy if NFL medical advisers say it is needed. Players, though, aren’t waiting for league officials to weigh medical science before upgrading a policy that lists marijuana as a banned drug.

“The problem for the league is trying to keep their stars off” marijuana, said Lincoln Kennedy, an ex-Raiders All-Pro lineman. “They are eventually going to allow it. They will never come out publicly and say that. But it’s going to be around because there are way too many things going on.”

What’s going on is the deteriorating health of many players from numerous football-related injuries to the ankles, back, head, knees, neck and shoulders.

Stanford’s only Heisman Trophy winner tried Bauer’s nonpsychoactive hemp oil for a month in early summer. He took two sprays of the liquid under the tongue three times a day hoping to feel better. The quarterback didn’t get the results he wanted and stopped for now.

Eric Wright, a 49ers cornerback from 1980-91, has enjoyed better luck since using an oil for the past year.

“It makes you sleep more comfortable and longer — for me,”  he said.  “I’m a total believer it helps, depending on who you are.”

Wright, 58, believes in his cannabis oil so much he sent some to his 80-year-old mother for her arthritic hands.

Bauer, who was forced to retire in 1983 after playing six games with a broken neck, has become an evangelist for Calexico Research and Development Institute, which manufacturers the hemp oil he gave to Plunkett and other former NFL stars.

“I’m not saying it’s a cure-all,” Bauer said. “Where I was taking copious amounts of ibuprofen and stuff like that, I stopped. I sleep better. I feel less stressed.”

Figuring out what to take, however, is not easy. Many people are confused over the plant’s different properties: Tetrahydrocannabinol (THC) is the ingredient that leads to a high whereas cannabidiol (CBD) is a nonpsychoactive chemical that researchers hope eventually can provide various medical benefits.

In general, a growing body of research shows a potential therapeutic value of cannabis for such conditions as pain, nausea, epilepsy, obesity, anxiety, addiction and autoimmune disorders, a National Institute of Health physician has told federal lawmakers.  A U.S. Department of Health patent says researchers have discovered that cannabidiol might have antioxidant properties that could help in the treatment of certain neurological diseases.

New York-based Kannalife Sciences is investigating cannabis for a possible treatment of chronic traumatic encephalopathy (CTE), a degenerative brain disease that has no known cure and is a growing concern for aging former players.

Such welcomed news comes with a caveat: Many scientists still maintain that adequate and well-controlled studies are lacking — this despite the fact the National Institutes of Health has supported 281 projects on cannabinoid research since 2015.

Players face a similar scenario as customers of alternative medicine who must weigh bold declarations based more on apocryphal stories than scientific rigor.

“The answers aren’t there, but in the absence of good science people have a tendency to make things up,” said Ryan Vandrey, a Johns Hopkins psychiatry professor who studies human behavior and pharmacology.

Medical researchers — and NFL officials — worry about the use of products not regulated for quality control that have yet to undergo rigorous clinical trials. They’re worried that leads to insufficient evidence to support their efficacy for specific conditions.

Marijuana is offered in so many forms and under so many names it’s sometimes difficult to know what to use for medical purposes. Practitioners can take it in creams, gels, oils, pills, sprays, syrups, edibles or old-fashioned weed.

“The only thing we can say with any confidence is that we know that cannabis has analgesic properties,” said Vandrey, who is at the start of research specifically targeting NFL players.

“It can help people in pain. Whether that translates to this context and whether it has an impact on opioid use, we have no idea.” 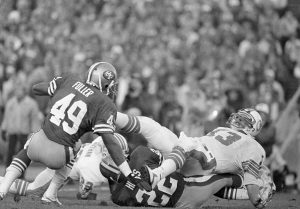 The interest in medical marijuana has increased as the country grapples with over-reliance on opioids such as Vicodin, OxyContin and Percocet. Retired NFL players use opioids at four times the rate of the general population, according to a study published online in Drug and Alcohol Dependence.

The Broncos, Chargers and Packers are defendants in a two-year old suit in U.S. District Court in San Francisco that spotlights the abuse of painkillers within locker rooms. The case started as a class-action complaint involving every team.

These situations have left some players circumspect of the NFL’s call for patience until Food and Drug Administration approval of marijuana.

Players such as Dwight Hicks, who made four Pro Bowls for the 49ers in the early 1980s, already have turned to cannabis as a substitute for painkillers. The leader of the famed 49ers’ defensive backfield known as Dwight Hicks and the Hot Licks puts hemp gel capsules in his smoothies a couple times a week.

“There is a natural way to balance the body,” said the former player turned actor. “These pharmaceuticals don’t cure anything — they just mask the symptom.”

Former All-Pro linebacker Tim Harris uses a homemade cannabis spray for inflammation of the knees and shoulders. He soaks the plant in rubbing alcohol for six months. Then the 6-foot-6, 275-pound man drains the alcohol to create a spray.

The concoction has allowed Harris to wean himself off high doses of powerful painkillers that he used to take every three hours.

“I could probably smoke a joint and I wouldn’t need to take my pain pill in the morning,” said Harris, a member of the 49ers team that won the Super Bowl in 1994.

But he also still takes the opioids morphine sulfate and OxyContin three times a day to help combat an aching body that has endured 32 football-related surgeries after a decadelong career. Harris, 52, needs another hip replacement and walks around his La Quinta home with a torn meniscus in his right knee because he doesn’t have insurance to get it fixed. 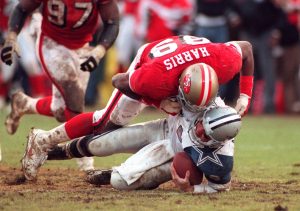 Reports from retirees struggling like Harris have led former quarterbacks Jake Plummer and Jim McMahon and others to lobby NFL officials to change their drug policy so CBD can be used by current players without fear of sanctions.

Veteran lineman Eugene Monroe joined the chorus last year while still active and now has speculated that the Baltimore Ravens released him last year because of it.

Although CBD contains little of marijuana’s psychoactive element, players still are just one toke from going over the line during offseason drug testing. Players face punishment if they test higher than 35 nanograms per milliliter of tetrahydrocannabinol. By comparison, the World Anti-Doping Agency that creates drug policies for the Olympics has a threshold of 150 nanograms per milliliter of THC.

Some former NFL players say the league needs to increase its limit to spare those using marijuana for pain relief. They say the line could still be low enough to catch recreational users.

Currently, players conceivably could take marijuana without impunity throughout the season as long as they got through the April-August testing period. Many do, according to Kennedy, the former Raiders’ lineman. Arizona psychiatrist Sue Sisley, who works with many current and former players, supports Kennedy’s assertion.

“The truth of this is these players already are using cannabis daily,” said Sisley, a former clinical assistant professor at the University of Arizona College of Medicine.

Players told Sisley they take cannabis until two months before training camp when testing starts. Those who pass the annual exam presumably can take whatever they want after that unless they do something to trigger follow-up testing as part of the substance-abuse policy.

The NFL’s Lockhart insisted a better understanding of marijuana benefits and possible side effects is mandatory before policy changes.

“The same people who criticized you for not not changing a policy based on anecdotal information will be there to criticize you for a policy decision that is proven to be wrong-headed,” said Lockhart, President Bill Clinton’s former press secretary.

But NFL officials plan to follow the science wherever it leads, including using marijuana as a neuroprotectant.

“If that is where the science and research lead us, that’s where we want to go,” Lockhart said. “This isn’t predetermined as much as people with agendas for and against may want it to be: It’s just not. But at this point, it is speculation and anecdotal as opposed to a scientific consensus building around it.”

The Drug Enforcement Administration in conjunction with the Food and Drug Administration classifies marijuana as a Schedule 1 drug in a group of the country’s most addictive controlled substances such as heroin, LSD and Ecstasy.

The drug’s legal status has often made it difficult for researchers to get approval to do the clinical studies NFL officials now are demanding. It took Sisely seven years to launch a pilot study involving veterans with post-traumatic stress disorder and smoking marijuana.

Now NFL players are forced into the same waiting game. Some day, marijuana could be seen as part of football’s culture. Until then, many quietly medicate while they wait for the science to meet NFL standards.

“We’re just sitting on the sideline,” said former All-Pro lineman Kyle Turley,  “because of the stigma of all these stoners.”