Study: Out of 2,400 CBD Users, 42 Percent Gave Up Pharmaceutical Drugs 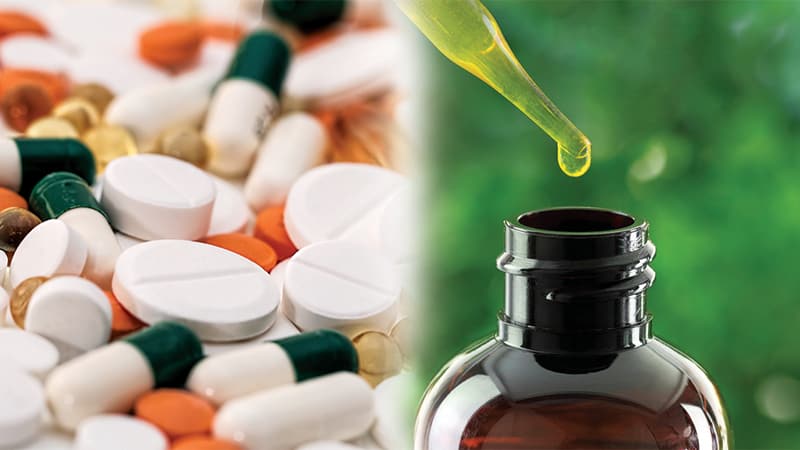 A new study shows that many consumers are giving up conventional pharmaceutical drugs in favor of CBD. CBD, or cannabidiol, is one of dozens of cannabinoids found in hemp, but unlike THC it doesn’t cause people to get “high.”  In a study released in early August, market-research firm Brightfield Group surveyed 2,400 registered users of Hello MD, a medical cannabis education and advocacy website. One of the study’s most dramatic findings is that 42 percent of people who use CBD report that they’ve given up pharmaceutical drugs in favor of cannabis in some form. This figure includes both strains of psychoactive cannabis, a.k.a. “marijuana,” with high levels of CBD and CBD-only products like CBD oil supplements made from industrial hem 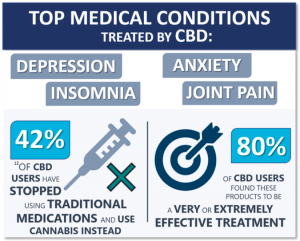 While the idea that people are giving up pharmaceuticals for CBD is making headlines — even in places like Forbes magazine — we wanted to dig deeper into this fascinating study, which reveals a lot of interesting details about how and why people are using CBD in all its forms.

HelloMD and Brightfield reported that 52 percent of people who responded to their research agreed that CBD is “more effective,” or “much more effective” than pharmaceutical drugs. People use CBD for diverse reasons, according to the study. 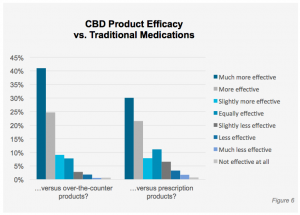 “There are a vast range of medical conditions that CBD consumers reported using cannabis to relieve, the principal among which were anxiety, insomnia, joint pain/inflammation and depression,” the authors reported.

An increasingly impressive body of scientific research backs up these CBD users’ first-hand experiences. Scientists have found evidence supporting the use of CBD to treat anxiety, insomnia, many forms of chronic pain and even schizophrenia, as we’ve detailed in previous articles at Ministry of Hemp.

EFFECTIVE BUT NOT A MIRACLE CURE: 57 PERCENT STILL USE CBD AND PHARMACEUTICALS TOGETHER

However, neither CBD nor any form of cannabis are miracle cures and it’s important to note that most people, or 57 percent, reported that they continue to use both CBD and pharmaceutical drugs together. People were also slightly more likely to report that CBD is more effective than over-the-counter drugs than to prescription pharmaceuticals, though users of both reported satisfaction with CBD.  It’s clear to us that while CBD can be a very useful tool for many people, it often can’t completely replace traditional Western medicine and prescription drugs.

Though this study shouldn’t be dismissed, it also differs somewhat from the kind of research that gets published in scientific journals. HelloMD users are presumably already predisposed toward interest in cannabis in all its forms, while those who found it ineffective are less likely to respond to a survey. There was also no placebo group as one would find in conventional “double blind” medical research.

“More research will be required to determine whether there is a causal link between CBD products and relief of the various health conditions discussed,” the authors caution.

In addition to comparing pharmaceuticals and CBD, the HelloMD and Brightfield study reveals a great deal about how people use CBD. Over 50 percent of people who responded to the survey said they prefer to vape CBD products, but tinctures, topical ointments and even gummies were also popular.

It’s important to note that a majority of the people who responded say they prefer to use CBD alongside THC, which can be a powerful painkiller. Many of those surveyed regularly use strains of psychoactive cannabis which are high in CBD, or they combine CBD-only products with other forms of medical cannabis. Users of both CBD and THC may be taking advantage of the “entourage effect,” where different cannabinoid chemicals work together to strengthen each other.

“Consumers may, for example, alternate between CBD-only products and THC-dominant products because the ‘entourage effect’ gives them more complete healing, but by differentiating the two it allows them to remain clear-headed during the workday and consume THC when they are relaxing in the evening,” the authors noted.

Of course, since just 29 states plus the District of Colombia have legalized medical or recreational cannabis in some form, and with the federal government still threatening to crack down on states that have legalized it, this option remains out of reach for many Americans.

Among those who only use CBD, 58 percent are women. This lines up with Ministry of Hemp’s informal research which shows that many women seek out CBD supplements to improve their lives or the lives of their loved ones.

According to Brightfield Group’s predictions, the future seems bright for CBD supplements and other CBD-based products:

“Per this survey’s responses, users have found CBD to be quite effective in relieving various medical conditions – even more so, in some cases, than their over-the-counter and prescription medications. … Over time, as the CBD compound becomes better-understood (especially with regard to its efficacy against medical ailments), and cannabis prohibition continues to wane across the states, CBD products are well-positioned to become an important player in the industry.”

Looking beyond the potential profits for growers and vendors, more importantly this study shows the immense healing potential of CBD. We hope that, in the near future, the medical industry comes to fully embrace CBD for their patients, and that the government continues to remove barriers that prevent people from using hemp and cannabis in all its forms in the ways that benefit them most.